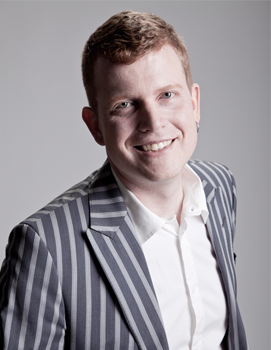 Marc Schwinges is a pioneer Digital Content Strategist at the intersection of marketing and entertainment on television, the web and mobile. He has produced a substantial volume of award-winning work, spanning commercials production, drama, reality television as well as documentary and on-line platforms, all of which has been seen and recognised the world over. As a cross-media expert, Marc consults to and provides television and interactive expertise to major multinational corporations, NGOs, governments and broadcasters. Marc has significant and unique expertise in South Africa’s rebate schemes as well as South African international co-production treaties and related scheme benefits. He also has significant contacts and experience working with all major South African television broadcasters and in the facilitation of international productions shooting in South Africa.

For the past two decades he has pioneered marketing communication and entertainment in television, on the web and in other interactive media, and even headed cross-media on the continent’s first three Big Brother series.

Marc presents at numerous international forums and conferences, most recently for the second time at the world’s largest documentary festival, IDFA in Amsterdam. He has also spoken for South Africa at North America’s largest documentary market, HotDocs in Toronto, as well as on several panels at the Durban FilmMart, P2P Documentary Conference and The Broadcast Show.

Recognised by his peers in the South African independent production sector, he is an active participant in several industry bodies. Marc is a former chairperson and and treasurer to the industry’s umbrella body, the South African Screen Federation. He is also a previous chairperson of the Independent Producer’s Organisation, honorary member of the Documentary Filmmaker’s Association, sits on the management committee of the Support Public Broadcasting Coalition.

Marc is CEO and Executive Producer of Underdog Productions, which he co-founded in 1993 as the first cross-media company in South Africa. Additionally he runs his own digital content strategy, consulting and distribution firm, Transmedia Africa, and continuing his belief in developing the black talent of South Africa he co-founded the documentary incubator Hybrid Docs.

Marc recently produced an innovative 13-part travel, food and lifestyle TV series called Rough or Smooth. The show features two of South Africa’s top soap stars who travel Africa, visiting some of the most remarkable and eclectic places and show the very different sides to the same destinations, hence Rough or Smooth. The show is currently in global distribution and Marc has already sold the series to broadcasters in Africa including M-Net, SABC and ANN7. Other highlights Marc has produced include the documentaries Death, Metamorphosis, Two Moms, Black Beulahs, Flush, and the Woman of the Year Awards.

Marc continues to develop properties, and finding innovative ways of maximizing ownership in the finance models to produce the properties. He also continues to assist producers and broadcasters from around the world in navigating the world of transmedia storytelling, as well as providing unique local production expertise and hands on co-production guidance. 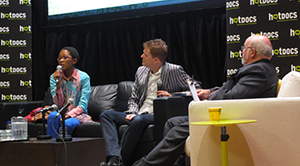 Neiloe Khunyeli of the NFVF and Marc Schwinges present for SA co-production at HotDocs, Canada 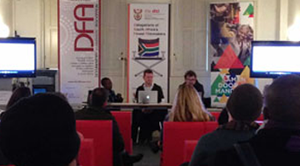 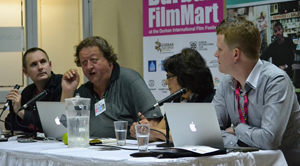 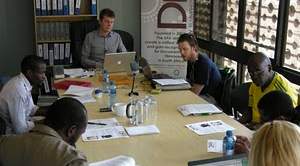 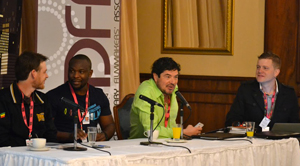 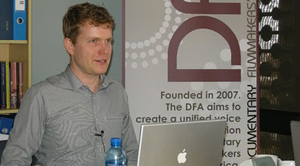